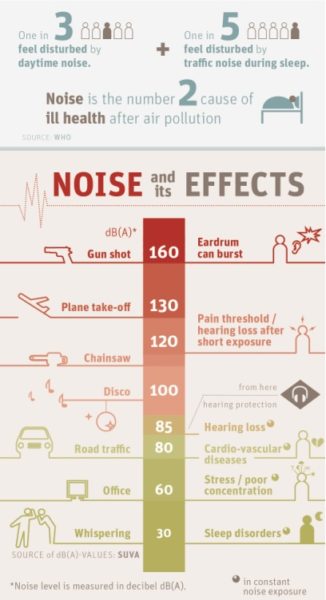 World Noise Awareness Day (INAD 2019)
On the occasion of the celebration of the World Noise Awareness Day (INAD 2019) on April 24, 2019, we would like to republish the following announcement from the Hellenic Institute of Acoustics (ELINA).
We consider our obligation to sensitize and inform engineers, contractors, but also individuals about the significance of noise effects both in the physical and mental health of all of us. That is why we consider it our duty to put forward as much as we can in the above-mentioned communication that explains the importance of noise pollution in the modern urban landscape.

The below text is a translation from the original text published at the ELINA website. The translation is done from Greek to English. 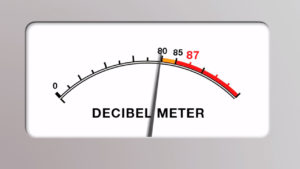 “Noise is an undesirable or unpleasant sound coming from human activities or natural phenomena. Numerous public opinion surveys, which have been repeated over the last decades in urban areas, show that noise (regardless of composition and origin) is hierarchy as the most important comfort problem. Environmental noise (from circulation, industry and mechanical equipment in general) due to a variety of activities (economic, household, recreational) causes serious disturbances, the extent and severity of which vary according to the distance of the source, the frequency characteristics and the duration of the nuisance, as well as the topography and planning of an area.
A WHO Baseline Survey (WHO) has shown that, after atmospheric pollution, noise is second in the classification of the risk of environmental hazards for the health. According to the WHO estimates, in Western Europe, a total of 1,000,000 years of life expectancy is lost each year from traffic noise. This is a conservative estimate, as there is insufficient evidence from the independent European states, nor about all the noise nuisances, so it is not easy to have a comprehensive European account of the problem.
Noise has evolved into a major public health problem for residents and policy-makers in the European Union. Exposure to noise is a treacherous process with immediate and long-term consequences, which are neither visible nor recognizable, but they systematically undermine health and exacerbate the unhealthy life expectancy of the citizens of Europe. Persistent and long-term exposure of people in noisy environments causes serious cardiac problems, temporary or residual hearing damage, nausea, dizziness, headaches, sleep disturbances and learning disabilities. Noise affects not only vulnerable groups of the population (first and third age, people in rehabilitation, pregnant women) but also productive ages. Especially, with regard to children, exposure to noise at critical school age is detrimental to their memory and educational performance as it has been shown that the noise burden affects the skills of writing, memorizing and dedication .
The WHO report (1999) was adopted by the European Parliament and led the Commission to Directive 2002/49 / EC which recommends action by the Member States of the European Union on three axes:
• measurement of exposure and noise impacts by common methods,
• drawing up action plans by the Member States,
• Public awareness of environmental noise and its consequences.
Reinforcingly, NORAH’s longitudinal research, a data center, noise disturbance and noise impact assessment, recently reached (2016) specific answers to various questions about the impact of traffic noise (air, road, rail) on areas around the airports of several German cities, where many millions of citizens live. In a global study articulated in five (5) sub-chapters, the NORAH survey found a great correlation between:
• cardiovascular disorders or depression and exposure to noise,
• the subjective sense of sleep quality and sound pressure in rest rooms,
• the intellectual development of primary school children and their sound environment.

Starting with the effort to solve the above problems, has identified (as from 2009) a maximum noise exposure level of 40 dB (A) and suggested that Member States adopt the 55dB (A) limit as the direct intermediate action target. Unfortunately, despite the European acquis, the Greek State is in institutional lag, as all the Greek practices in the fields of Environmental Sound Protection and Building Acoustics remain in a vague and ineffectual legislative framework. Specifically:
• the Soundproofing Study of Buildings is not compulsory for the issuance of building permits, ie no preventive technical inspection,
• the existing Building Regulation (article 12) is relatively old (GG 1989) and has not been harmonized with the scientific and methodological technological developments, such as the other Greek Regulations (other aspects of building protection), but mainly the corresponding Regulations of the EE states. E.,
• Since 1989, the Presidential Decrees which would have laid down urban areas A ‘of acoustic comfort class are still pending, so the whole territory is in the lowest category.
With existing data, even in new constructions, the status of reduced sound insulation of buildings is perpetuated, as each year of technically untapped space is addressed to a possible solution after at least six (6) decades, to glory of all those who evangelize the modernization of Greek society. The existing framework for building construction virtually eliminates the legal procedures for the technical solution of sound insulation:
• the Building Regulation does not apply,
• the technical competence of the Designers,
• no liability is stated by the Manufacturers,
• Acoustic comfort of the Users-Hire is not guaranteed
It is a labyrinth, scientifically imperfect and administratively opaque, flanked by administrative circulars and regulations (formerly the Ministry of Industry, Health Services or the Police Authority), and in the sole interest of those involved in the issues of licensing technical works and businesses.
The Greek State does not seem to realize that maintaining the current situation (ie degraded residential comfort) seriously harms the health of citizens. At the same time, the general public does not seem to be aware of the harmful effects of its exposure to noise, thereby contributing (consciously or unconsciously, directly or indirectly) to increasingly high levels of noise (in fun, driving or during hours of shared silence) .
On the occasion of this year’s global noise awareness day, the Hellenic Institute of Acoustics reiterates the sound scientific evidence for the increasing negative impact of noise on health and calls on the Greek State to take appropriate institutional and legislative measures. At the same time, everyone, regardless of age, with our individual attitude, can help reduce noise emissions.
Acoustic comfort contributes to a better quality of life. ”

Antonios is our HVAC and industrial noise control specialist.

With his valuable experience in acoustic consultancy projects and his solid academic background with an Msc in Environmental Acoustics he has successfully enriched ALPHA ACOUSTIKI’s scientific personnel.

He has recently become our new Exports Manager and deals with clients and queries from all around the globe.